It is with great sadness that we announce that Cllr Mrs Ros Mill, Councillor for Kingswood with Burgh Heath ward, passed away on Thursday 6 September. 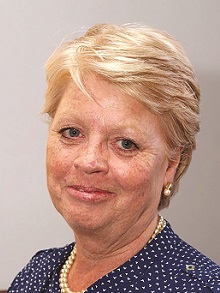 "Ros was a long serving, well respected and well liked member of this council and her passing is an extremely sad loss that is felt by us all, councillors and staff alike.

“Ros was committed to the well-being of all borough residents and worked hard on behalf of the community she represented, always giving her all to everything she did. It is an honour to have been able to work alongside her.

“During her time as an Executive Member, Ros was involved in some significant projects which will leave a lasting legacy for residents, including the development of the new Tadworth Leisure Centre, our award-winning Living and Ageing Well initiatives and partnerships and support for the voluntary sector.

"Our thoughts are with her family, friends and colleagues at this sad time.”

Mrs Mill was first elected to the Council in May 2007 to represent the Kingswood with Burgh Heath ward.

In addition, Cllr Mrs Mill was a member of Surrey County Council’s Local Committee for Reigate and Banstead from 2009 to 2010.

Outside of the Council, Cllr Mrs Mill worked as Marketing Director for Aberdour School in Burgh Heath.

The Council has written to Cllr Mrs Mill’s family to offer our condolences at this difficult time.