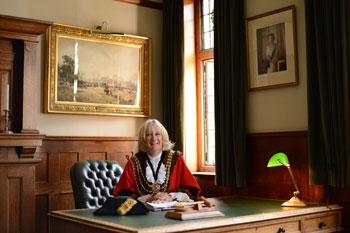 Cllr Jill Bray has been a borough councillor since 2005 and represents the Tattenham Corner and Preston ward, where she has lived since 1982.

Over the years, she has served on the Council’s Standards, Planning, Employment and Audit committees, the latter of which she chaired. She was also Deputy Mayor in 2009.

Cllr Bray has been the Council nominee at the Raven Housing Trust where she was a Non-Executive Director and chaired the Audit committee. She devoted much of her time to ensuring that Raven was in a strong financial position to continue its aim of providing good quality homes and services throughout the borough of Reigate and Banstead.

She worked for Barclays for 31 years reaching senior management. Starting her career in London before moving to a variety of branches including Barclays Internal Audit team. Prior to her early retirement in 2004, she worked in the Guildford area.

Cllr Bray's father was in the Army, so she had a nomadic early childhood, settling in Essex when he left the forces. She made Epsom Downs her home when she married her late husband in 1982. In 2015, Jill married Richard Mantle and they continue to live in the Tattenham & Preston Ward.

Outside her work with the Council, Cllr Bray is involved in several local organisations. She is on the Tattenhams Residents committee, chairs the Walton on the Hill Arts Society and sits on the Tattenhams Community library steering committee. Cllr Bray enjoys long distance walking, gardening and fund raising for her favourite charities.

Cllr Bray has chosen to support two local charities - Age Concern Banstead and YMCA East Surrey - during her Mayoral term, which runs until May 2022. She also intends to thank and recognise as many individuals and organisations as possible for their contributions during the Covid-19 pandemic.

She explains: “The example of our volunteers, healthcare workers and health professionals during these difficult times needs to be lauded and recognised as we return to a more normal way of life.”

Invite the Mayor to an event

During the year, the Mayor will represent the Borough by attending a broad range of functions, from formal receptions and official openings to visits to local clubs, schools and community groups, to 100th birthday celebrations.

If you would like to invite the Mayor to an event, please complete this form.