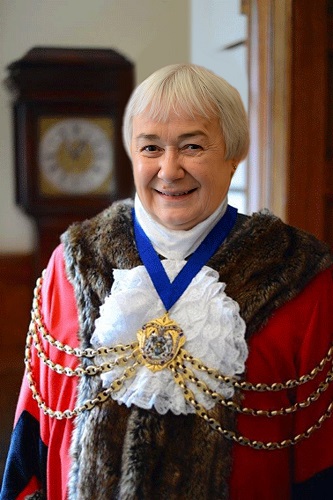 Councillor Rosemary Absalom was born in Purley, has lived most of her life in Surrey and moved to Reigate in 1980 when she married David Absalom. They have one adult son, Gregory.

An Office Administrator, Councillor Absalom began her working life at the Canadian High Commission in London and, after moving to Reigate, she worked locally until her son’s birth in 1985.

In her leisure time and having danced, sung and acted on the professional stage and pursued artistic studies at art college, Councillor Absalom retains a lifelong interest in the performing and visual arts and, happiest on snow and in water, Councillor Absalom also enjoys both skiing and swimming.

Cllr Absalom has chosen the Community Fund for Reigate & Banstead as her charity for the municipal year, which runs until the end of May 2021.

The Community Fund provides support to local projects which tackle need, disadvantage, and community participation across the borough. Currently, all grants from the Fund are now being made specifically to local charities and projects that need financial support to provide their services to assist with the Coronavirus response.

Donations can be made via the Virgin Giving page

Cllr Absalom explained: “There’s never been a better time to get behind the Community Fund. Even before these strange, unprecedented times, there were residents in the borough facing extreme hardship – poverty, homelessness, domestic abuse – and now, more than ever, they need our support.

“While the start of my Mayoral term is going to be a little different to usual, there’s still lots to be done from home, thanks to the great technology of today! I look forward to being able to attend events and meet our wonderful residents and organisations around the borough when the time is right.”

Cllr Absalom announced at Annual Council that three-quarters of the Mayoral allowance that she receives during the Coronavirus crisis will be donated to the Community Fund.