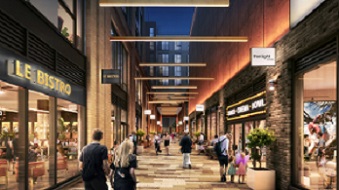 The Light will open a new cinema, bowling and entertainment venue for Easter 2023 as the main tenant within the Council’s new landmark development in Redhill town centre, now called The Rise.

£8.8m funding boost for improvements to facilities and local services

Investment in health services, school expansion, new footpaths, cycleways and open space enhancements are among the projects funded from over £8.8 million of developer contributions.

Improving our environment and reducing our impact on the planet is a critical global goal. It is also an important ambition in the Council’s corporate plan and Environmental Sustainability Strategy.

A planning application for a new crematorium and memorial garden in Woodhatch has been submitted by Reigate & Banstead Borough Council to provide a more local service for bereaved families.

Reigate & Banstead has highlighted a raft of concerns with the latest planning reform proposals in its robust formal response to the Government’s recent Planning for the future public consultation.

Reigate & Banstead has highlighted several concerns with the Government’s proposed Changes to the current planning system via a robust formal response, as part of the recent public consultation.

Our Council meetings are now being run virtually so that the democratic process can continue despite coronavirus social distancing measures.

The Council has formally adopted its Development Management Plan (DMP) after a Government Planning Inspector found it sound and legally compliant.

A six-week public consultation on proposed changes to the Council’s Development Management Plan (DMP) is underway.

The Planning Inspector has published her post hearing advice on the main modifications needed to the Council’s Development Management Plan (DMP) to make it ‘sound’.

Our building control service has joined forces with the teams at Mole Valley and Tandridge district councils to become Southern Building Control Partnership.

Housing developer Shanly Homes has been fined £10,000 for wilful damage to two protected trees in Redhill following a successful prosecution by the council.

Fine for owners of property after planning breach

Owners of a property in Horley have been fined almost £5,000 following a successful planning enforcement prosecution by Reigate & Banstead Borough Council.

“Following our visit to Honeycrock Farm yesterday (Wed 29 June 2016) we are satisfied that Mr Fidler has complied with the requirements of the outstanding enforcement notices," announced the Council.

A High Court hearing to decide whether Mr Fidler has complied with the court order requiring him to demolish the unlawful house and structures at Honeycrock Farm has been adjourned to 4 July 2016.

Ambitious plans for a new multiplex cinema, restaurants and shops in Redhill town centre have moved a step closer with the submission of a planning application by Reigate & Banstead Borough Council.

Update on Honeycrock Farm in response to media reports that Mr Fidler is demolishing his unauthorised dwelling.

The latest statement from the Council regarding the contempt of court hearing relating to Honeycrock Farm.