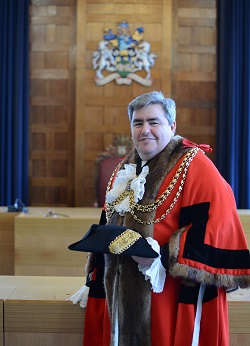 Councillor Kelly has been Deputy Mayor twice, firstly in 2017 and secondly in 2020.  Within the council, he chairs the Licensing committee having served for several years as deputy, and he sits on the Standards and Planning committees.

The outside bodies he sits on include several YMCA boards for housing, young people and health and wellbeing, Age Concern MRR (Merstham, Redhill, Reigate) and the Surrey Historic Environment Forum as a Heritage Champion.

He is a keen supporter of the YMCA, participating in many of their fundraising challenges including 10 years of their annual Sleepeasy events, as well as numerous funruns and even a firewalking challenge!

For the last 26 years Councillor Kelly has lived in Merstham with his wife, 3 daughters, 2 cats and a dog.  Councillor Kelly has worked for the NHS since 1986 in variable positions and units but always within the Mental Health and Learning disabilities sphere. He was part of the transition teams from Hospital closure to establishing community-based homes.

In his spare time Councillor Kelly enjoys reading, watching rugby which he played for many years, walking for pleasure, he is a keen supporter of his local Karate club (although has had to give up participating), and he is currently halfway through a 7-year Open University course studying Psychology and Counselling.

Sadly, during early 2021 Councillor Kelly contracted Covid 19, and this led to hospitalisation and life changing conditions but he feels that he is one of the lucky ones, able to be here today, and it is a huge honour to be representing the borough of Reigate & Banstead as its Mayor for the 2022/23 year.

Councillor Kelly’s theme for the year is ‘’Be the difference.’’ The world is coming out of a time of uncertainty and great sadness and going forward, little differences that people make can make a big difference to others.

Cllr Kelly has chosen to support two local charities - SASH and The Include Project - during his Mayoral term, which runs until May 2023.

Invite the Mayor to an event

During the year, the Mayor will represent the Borough by attending a broad range of functions, from formal receptions and official openings to visits to local clubs, schools and community groups, to 100th birthday celebrations.

If you would like to invite the Mayor to an event, please complete this form.