Fifty seven hard working volunteers from across the borough have been recognised for their dedication to the community by the Mayor of Reigate & Banstead at a special awards ceremony. 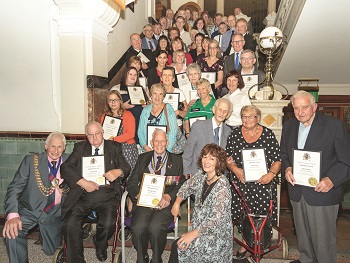 Fifty hard working volunteers from across the borough have been recognised for their dedication to the community by the Mayor of Reigate & Banstead at a special awards ceremony.

Some of the volunteers receiving awards have given over 70 years’ service to their community and together they have volunteered for over 300 years!

Three of the award winners also received Outstanding Volunteer awards for a lifetime of dedication to others, with over 160 years’ service between them. Ronald Pearce (aged 98) from Hroely has volunteered for the Royal British Legion since 1949; Barbara Wing of Surrey East Trefoil Guild has volunteered for 63 years with the Guiding movement; and Marianne Hecker was rewarded for her for her inspirational and innovative idea of Us in a Bus for which she has volunteered for 25 years.

The Mayor of Reigate & Banstead, Cllr David Powell, presented the winners with framed certificates, which was followed by a reception to thank them for their valuable commitment and contribution to the borough.

The Mayor said: “I want to thank all our volunteers for contributing so greatly to our local area - making the lives of so many other people so much better. Volunteering on a regular basis is not easy.  We all have such busy lives and to dedicate time to others is sometimes tricky. However, I know it is also extremely rewarding and appreciated by those that receive their support.

“Our award winners have played an important part in so many peoples’ lives and that’s why they are so deserving of these awards.”

This is the thirteenth annual Mayor’s Volunteer Awards since the scheme was launched in 2004 to recognise the contribution volunteers make and to celebrate the role of the voluntary sector in supporting the borough and its residents.

The annual awards scheme is organised by the Council in partnership with Voluntary Action Reigate & Banstead.

Gill Williamson, Chair of Voluntary Action Reigate & Banstead, said: “We have heard some truly inspirational stories. Congratulations to everyone who received an award and on behalf of the voluntary sector, thank you for your time and commitment.

"The search for volunteers is ongoing. If you have been inspired by the Mayor’s Volunteer Awards and want to find out more about volunteer opportunities then please come along to our Volunteer Fair at Reigate College on 13 October (4.30pm – 7.00pm). Over 30 local organisations will be there, all hoping to meet the next set of Volunteer Award winners.”

For more information about the awards scheme see the Mayor's Volunteer Awards page.