More success, and best year yet, as our parks and green spaces improved on previous results in the South & South East in Bloom competition and again achieve Green Flag status.

Earlswood Common retained its gold, when the Council was awarded another nine awards in 2021 by South & South East in Bloom, along with an increased silver-gilt for Reigate Heath. A grand total made up of four golds, three silver-gilts and a silver this year.

Judges remarked that Earlswood Common was ‘a significant and developing country park’ and recognised the range of habitats being developed, supported or established for this Site of Nature Conservation Interest. Also, the Council’s overall best practice approach and support by a range of wildlife and countryside volunteer groups.

Reigate Heath is a Site of Special Scientific Interest and designated Local Nature Reserve and was recognised by judges for various improvements.  These included renovated way marker posts, ongoing work to clear scrub and bracken to enable heather to re-establish, and the active volunteer groups and management committee.

As well as retaining their gold awards, both Memorial Park, Redhill and Priory Park, Reigate were also recognised as some of the very best green spaces, by achieving coveted Green Flag status again in 2021.

Executive Member for Neighbourhood Services, Cllr Natalie Bramhall said: “It’s been another year of outstanding achievement for our local parks and green spaces, particularly for Earlswood Common and Reigate Heath. We are extremely proud of the best results yet in the South & South East in Bloom awards, and again achieving Green Flag status, which also recognise and celebrate the dedication and hard work of our Greenspaces team. 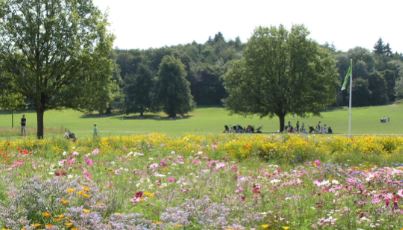 “Although the pandemic brought extra challenges and pressure on keeping them attractive and exciting, these open spaces remain very special places for residents and visitors. I’d like to thank the Greenspaces team, and everyone else who helps ensure our parks and countryside can be enjoyed by so many people all year round.”

“To meet the requirements demanded by the scheme is testament to the hard work of the staff and volunteers who do so much to ensure that they have high standards of horticulture, safety and environmental management and each is a place that supports people to live healthy lives.”

Visit our parks and countryside pages to find out more.