A triumphant return for the Reigate & Banstead Volunteer Awards

The annual Reigate & Banstead Volunteer Awards made a triumphant return on Tuesday evening (21 September) with a special ceremony at the Harlequin theatre in Redhill.

The scheme, now in its eighteenth year, returned after a one-year hiatus due to the pandemic and this year recognised the contributions and hard work of more than 40 individuals and groups for their efforts before and during the pandemic.

The Mayor of Reigate & Banstead, Cllr Jill Bray, presented individuals and groups with certificates and thanked them for their hard work – with the vast majority of recipients able to attend the event in person. 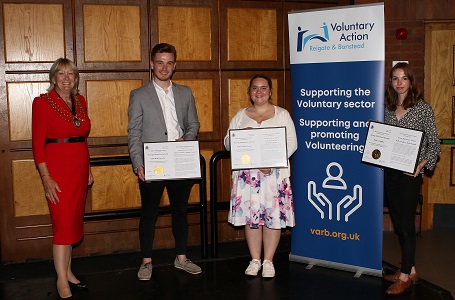 Cllr Bray said: “It was a pleasure to be able to host this year’s awards ceremony and to celebrate the vital work so many of our residents do to keep so many of us safe and supported throughout the pandemic.

“Never has volunteering been more important than it is now. It’s thanks to the selfless contributions from many individuals in our borough that our most vulnerable communities have felt supported and looked after in some of the most challenging of circumstances.”

The scheme is organised by Reigate & Banstead Borough Council in partnership with Voluntary Action Reigate and Banstead (VARB) and was previously called the Mayor’s Volunteer Awards.

Alisdair Semple, Trustee of VARB, said: “In our charity’s 25-year history, we have not seen anything like the multi-generational response to help and support those most in need that we’ve seen in the past year.

“What an incredible time to shine a spotlight on those that served, to note something of their contributions and to celebrate the silver-linings of generosity and kindness under pressure that been shown by so many.”

This year marked the first time The Peter Harrison Award was presented, in memory of the Foundation’s founder, Sir Peter Harrison CBE, who sadly died this year. The recipient of the award was a local organisation or individual that had demonstrated exceptional work in helping children and young people in the borough.

The winner of the award this year, Lt (SCC) Peter Bishop, of the Reigate Sea Cadets, was shortlisted by a panel including the Mayor and chosen as the winner by the foundation's trustees.

Vivien Carroll, Age Concern Merstham Redhill & Reigate – Made regular phone calls to up to 17 clients throughout the closure of their day centre.

Louise Kingsford, Facebook – Meals for More – Set up a group to provide cooked meals to residents in need.

Kerensa Samanidis, Loveworks & St Matthews Food Bank – Has organised a collection to take to the foodbank every week since the start of the pandemic.

Redhill & Reigate Covid 19 Mutal Aid – Volunteers fulfilled over 1,500 requests for help in the community since the start of the pandemic.

Sofia Yermo Moore, The Include Project – Has volunteered since the age of 14 and helped out in vaccination centres as well as many other aspects of Include’s operations.

Christian Parsons, Reigate Priory FC – Organised a group of volunteers to build a ’drive thru’ donation centre at the club during the pandemic.

Ruth Geraghty, Radio Redhill – Joined the team on her 16th birthday and has sine visited patients on the wards and eventually trained to become a broadcaster. She is now a trustee.

Lyn Watson, The Tuesday Club / Dcaf – Single handedly continued a service to support people with dementia and their carers after a national charity withdrew its local services.

Samantha Karanth, Reigate & Banstead Women’s Aid – Has volunteered as a counsellor for five years, seeing up to six clients a week. She offers emotional support to victims of domestic violence.

Diana Twyford, The Brigitte Trust – Joined early last year and has provided emotional support by telephone to clients during the pandemic – has since trained to be a face to face volunteer.

Jenny Wood, The Brigitte Trust – Has volunteered with the Trust since 2012 and has provided emotional support and practical help to numerous clients.

Georgina Dale, St John Ambulance – Joined the service in 1998 and has since taken on numerous roles – including logistics, HR, training, and as Co-Unit Manager of the Redhill Unit.

Ann Morris, Library Direct Home Services – Has volunteered for over 19 years and visits housebound clients every month, choosing books from the library and checking all is well during each visit.

Jes Chandler, Reigate Business Guild – Served as Chairman of the Guild for many years until he stepped down last year, but plays a leading role in installing flags in the town each year as well as the Christmas lights.

Robert Walker (Bagheera), 34th Reigate Scout Group – Has volunteers with the Scouts for 40 years and organises a wide range of activities for children as Cub Leader – setting up virtual sessions during the pandemic.

Louise Griffiths, Kingswood Terriers Football Club – As Club Secretary, has taken a leading role in growing the club from six to 20 teams over the past five years, setting up internal systems and processes, as well as a subscription package and sponsorship plan.

Norman Phillips, Reigate & Banstead District Sports Council – Has served as Chairman for approximately 20 years, working tirelessly to promote sport within the borough and has played an instrumental role in ensuring the success of the Festival of Sports and Sports Awards.

Laura Walker, Infinity Space to Grow – As a founding trustee, helped setup the organisation as a space for families to meet, learn, laugh, and grow. Since the pandemic, they went virtual, reading bedtime stories and hosting forums for families.

Kate Phillips, Infinity Space to Grow - As a founding trustee, helped setup the organisation as a space for families to meet, learn, laugh, and grow. Since the pandemic, they went virtual, reading bedtime stories and hosting forums for families.

Susie White, Loveworks – Has made a huge contribution to the charity including marketing and communications. Supported the establishment of a new warehouse space to help meet demand for a significant uplift in food storage since the start of the pandemic.

Andy Porter, Reigate Priory Hockey Club – Now in his 18th year as a club volunteer, he has held many roles. During his six years as club Chair, the club won ‘Club of the Year’ twice and expanded its membership significantly. He has organised Covid-secure hockey playing opportunities since the start of the pandemic.

1914 - 18 War Dead of Banstead Remembered – The group has organised 143 individual services so far to commemorate those who had lost their lives in the First World War.

St Mary's Church Cooks – A group of 15 women, who, since the start of the pandemic, have cooked over 3,000 meals and supported over 50 families and individuals.

South East Surrey Global Resettlement Scheme – Have supported the resettlement scheme on a regular basis since the scheme’s advent five years ago. Since the start of the pandemic, volunteers helped teach English via computer and phone.

MYTI Club – Steve and Tony set up the club to provide activities to young people in the community, with more than 90 young people currently signed up. The pair have fundraised, run school holiday clubs, run outings, and after school activities.

Loveworks Logistics and Packing Team – The team has made a huge contribution to the charity and to residents since the start of the pandemic. They have adapted to constant changes in venue, process, health and safety parameters, and increased referral numbers.

Renewed Hope Drop-In volunteers – Around 100 drop-in volunteers have turned out every day to make meals and serve lunches to people in need.