Memorial Park, Redhill and Priory Park, Reigate have been recognised again this year as some of the very best green spaces, by achieving coveted Green Flag status in this global award scheme.

A prestigious Green Flag is the mark of a high-quality park or green space and Memorial Park and Priory Park join nearly 2,000 other places gaining recognition in the UK. This long-standing international award shows everyone that a space has the highest possible environmental standards, is beautifully maintained and has excellent visitor facilities.

This builds on another recent success for our parks and green spaces, when South and South East in Bloom awarded the Council four golds and a silver gilt for first time entrant Tanyard Meadows – a grand total of nine awards. These included diverse locations like Earlswood Common and Priory Park, both improving on last year with gold awards. The judges also congratulated the team at Redstone Cemetery for retaining their gold despite these particularly challenging times.

Executive Member for Neighbourhood Services, Cllr Natalie Bramhall said: “Local parks and green spaces became even more important in the past six months. We are absolutely thrilled to receive another Green Flag Award for both Memorial Park and Priory Park. Also, for the great result of nine significant awards in the recent South and South East in Bloom competition. We know our parks and open spaces enrich people’s lives and are much loved by residents and visitors. 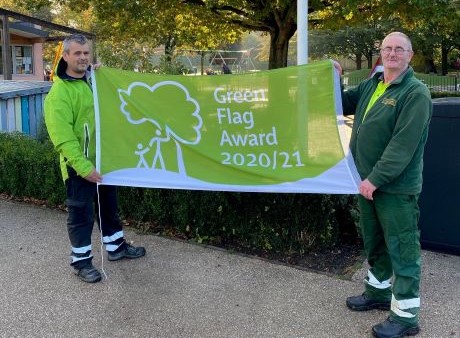 “We are enormously proud to provide such attractive and exciting open spaces and our dedicated teams continue working, so everyone can enjoy these special places across the borough. I’d like to thank the Greenspaces team again for all they do. These awards also celebrate their devotion as well as hard work throughout the year.”

Keep Britain Tidy Chief Executive, Allison Ogden-Newton OBE,  said: “This year, more than ever, our parks and green spaces have been a lifeline and we know that millions of people have used them to relax, meet friends, exercise or simply escape for a short time.

“It is testament to the incredible dedication and hard work of staff that, despite the challenges that went along with record numbers of visitors, Reigate & Banstead Borough Council has achieved the highest international standards in Memorial Park and Priory Park demanded by the Green Flag Award.”

Find out more about Reigate & Banstead's green spaces on our parks and countryside pages.