Almost 250 people took part and it was a tough decision for the crews to choose their favourites. By asking the public for suggestions, the crews wanted to thank local residents for their support and understanding during the Covid-19 pandemic – as well as have some fun. 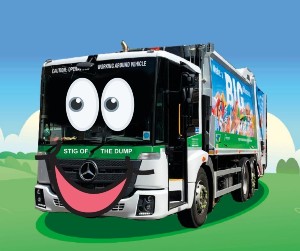 Dan Foot says: “I chose Bin(g) Crosby to join my team as some of my loaders are almost as old as his films! On a more serious note, the crew was very grateful for all of the goodwill and messages that we received during lockdown.”

Gary Heaver says: “I chose the Flying Dustman as our loaders work quickly & efficiently – because I don’t let them get away with any nonsense!”

The full list of names is below and residents are asked to look out for the newly named trucks coming soon to a street near them.

Last week Recycle Week 2020 was used to thank the nation for continuing to recycle despite the challenges of Covid-19. Not only have the crews continued to collect the borough’s rubbish throughout the pandemic, but residents have dramatically increased their recycling too.

Cllr Natalie Bramhall, Portfolio Holder for Neighbourhood Services says: “Our crews have been real local heroes - keeping going throughout lockdown and all through the summer.

“They’ve seen a huge increase in rubbish since March and collected over 20% more recycling year on year. Now, more than ever, recycling what we can as individuals can make a BIG difference across the borough.”

Reigate & Banstead Borough Council’s new recycling campaign, ‘Make a BIG Difference’, aims to encourage residents to continue to play their part and builds on the latest findings from Recycle Now that 9 in 10 households say they regularly recycle. The colourful campaign can be seen on the new waste and recycling trucks and will be visible across social media.

The names of the 11 new trucks are: Bin Crosby, Bin Diesel, Dusty Bin, The Flying Dustman, Gabby Garbage, The Hulk, Monster Mash, Stig of the Dump, Stirling Muck, Trash Gordon, Trucky Truckerson and we’d like to thank all those who suggested them.