New Mayor and Deputy Mayor for Reigate and Banstead

Cllr Keith Foreman has taken up his role as the new Mayor for Reigate & Banstead, and has announced that his theme for his term in office is ‘Working together for our great community’. 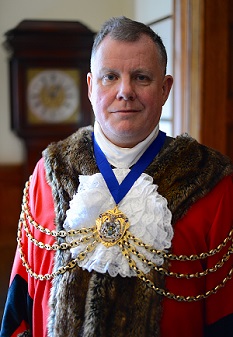 He was elected at the full Council meeting on Wednesday 29 May.

Cllr Rosemary Absalom will be Deputy Mayor for the municipal year, which runs until the end of May 2020.

Following his election, Cllr Foreman said: “I am honoured to be asked to serve as Mayor, and will put my heart and soul into this role. I look forward to working with what is already such a top-class team to deliver the best we can for the borough and its communities.”

Born in Edinburgh, and raised in Surrey, Cllr Foreman has lived in the Borough since 1997 with his wife, Helen, and their two adult children, Rachel and Stephen.

An enthusiastic runner and cyclist, Cllr Foreman has completed an incredible 11 marathons, and has raised over £12,000 for multiple charities. His next adventure is walking the 184-mile Thames Path with his wife later this year.

The Mayor has chosen two local charities to support during his term in office, in line with his theme of ‘Working together for our great community'. The first is Stripey Stork, an organisation which collects new and pre-loved items for babies and children and distributes them to families in need in East Surrey and the surrounding areas. The second is Loveworks, which runs foodbanks in Reigate and Merstham in a bid to tackle food poverty and social isolation in the local area.

With regards to his choice of theme, Cllr Foreman explained: “We have seen many fantastic examples, here and elsewhere, of how powerful working together can be. It is something we can all do with a little effort and thought, and I hope that during my time as Mayor I can do my bit to help these charities, and in turn our local communities, to thrive.”

Cllr Foreman has been a councillor since 2012, serving on most of the Council’s committees and was, most notably, Deputy Mayor in 2016/17. For the past two years, he has been the Executive Member for Planning Policy. With a background in financial management, Cllr Foreman has been using his expertise to serve many local community organisations, including Voluntary Action Reigate and Banstead and the YMCA.

Deputy Mayor, Cllr Absalom, has lived locally for nearly 40 years, and was elected as a Borough Councillor in 2015. She too has a keen interest in the voluntary sector, having undertaken a number of voluntary roles within property management and church governance, and also with the Citizen’s Advice Bureau and two residents’ associations. She continues to volunteer at her local parish church.

During their term in office, the Mayor and Deputy Mayor will represent the borough of Reigate & Banstead at hundreds of functions, including formal receptions, official openings and visits to local community groups. They will also host fundraising events for their chosen charities.

If you would like to invite the Mayor to your events, special occasions or launches you can do so via the Inviting the Mayor page

For more information about the Mayor, Deputy Mayor and their charities see the Mayor page.