Priory Park playground set for refurb - what do you want to see?

Priory Park’s popular playground is set for a revamp next year to replace its ageing equipment.

The playground, which opened in 2007, is now 11 years old. With over three million visits to the park each year from all over the borough and further afield, it is showing signs of wear and tear. 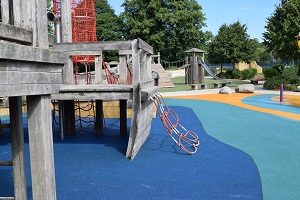 The well-loved ‘Grey Lady’ ship will remain in spirit, but will be replaced with something more modern while in keeping with the playground’s nautical theme.

The refurbishment will also include other popular pieces, like the climbing tower and zip wire, which are currently out of action.

The popular splash play equipment which was replaced last year is not included in the refurb, and the layout and planting will remain the same.

The project is part of the Council’s rolling programme of investment in its parks and greenspaces around the borough, which has already seen play areas in Chipstead and Kingswood upgraded this year.

Tell us your views

To help inform what new equipment goes into the playground, the Council has set up a survey to get users’ views.

Cllr Alex Horwood, Executive Member for Neighbourhood Services, said: “Children have been having fun climbing, swinging, sliding, hiding and scrambling around Priory’ Park’s playground for 11 years now. All that fun has taken its toll on the equipment and so we need to replace it.

“Priory Park and its playground is much loved and well-used and we want to make sure it stays that way. The refurbishment is an opportunity for us to refresh and update the play experience for children, as new, more exciting equipment is now available. It is also important that the new equipment is easy to maintain and will last.

“We’re keen to hear users’ views on what they’d like to see so that what we put in meets their needs. Please take part in our survey to tell us what you think.”

The refurbishment is expected to take place during May and June 2019 following a tender process for the new equipment.

In the meantime, the Council will continue to maintain the existing equipment. Repairs to the zip wire, tower slide and part of the ship will be taking place soon so that can be enjoyed once again.

Priory Park playground opened in its current form on 19 October 2007 as part of the Council’s Priory Park restoration project, funded by a £4.6m grant from the Heritage Lottery Fund, commercial sponsorship and the Council.

Its nautical theme links with the history of Reigate Priory, which has strong maritime connections, with former residents including Lord High Admiral, Lord Charles Howard of Effingham and Admiral of the Fleet, Earl David Beatty.

The ‘Grey Lady’ ship is named after the ghost that is rumoured to walk Reigate Priory’s corridors, following a naming competition for local school children.