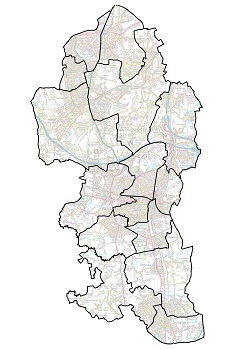 Today’s publication follows public consultation on its draft proposals and draws new boundaries for each council ward across the borough.

The boundaries of all Reigate & Banstead’s current wards will change as a result of the review.

The Commission’s final recommendations propose that Reigate & Banstead should be represented by 45 borough councillors in the future: six fewer than the current arrangement.

The recommendations also propose that those councillors should represent fifteen three-councillor wards across the borough.

Professor Colin Mellors, Chair of the Commission, said, “We are extremely grateful to people across Reigate & Banstead who took part in the review. The Commission has looked at all the evidence that was put forward during the consultation.

“We believe these recommendations deliver electoral fairness for voters as well as reflecting community ties throughout Reigate and Banstead.”

In response to local feedback during consultation, the Commission has made changes to some of the wards it put forward for consultation earlier this year. For example, the Commission’s draft recommendations used the railway line in Kingswood as the boundary of the Chipstead & Kingswood ward.

Responses to the public consultation on the proposals argued that both sides of the railway line at Kingswood shared community interests and identity. The Commission has listened to those views and has changed its recommendations to create a Chipstead, Kingswood & Woodmansterne ward that unites the community.

The Commission also believes that Lower Kingswood should not be divided between wards and has recommended the creation of a Lower Kingswood, Tadworth & Walton ward in order to avoid dividing the community.

In Redhill, the Commission has responded to local feedback by changing its recommendations so that the Cromwell estate will not be divided between wards as well as amending the proposed boundary in the town centre to ensure that the elected representatives of communities to the east and west of the town centre are directly involved in town centre issues.

To the south of Redhill and Reigate, the Commission has also reshaped its recommendations in response to local views put forward during the consultation. As such, the final recommendations are for an Earlswood & Whitebushes ward which is similar to the current ward alongside a Meadvale & St John’s ward.

Elsewhere in Reigate and Banstead, the Commission has made minor amendments to its draft recommendations to reflect local responses to the consultation.

Full details of the final recommendations (including maps) are available to view on the Commission’s website or their consultation portal.

The proposed new arrangements must now be implemented by Parliament. A draft Order – the legal document which brings into force the recommendations – will be laid in Parliament in the coming months.

The draft Order provides for the new electoral arrangements to come into force at the council elections in 2019.