Modern Slavery is a hidden crime - but the shocking truth is that victims of modern slavery can be found anywhere, even in the leafy towns and villages of Surrey. 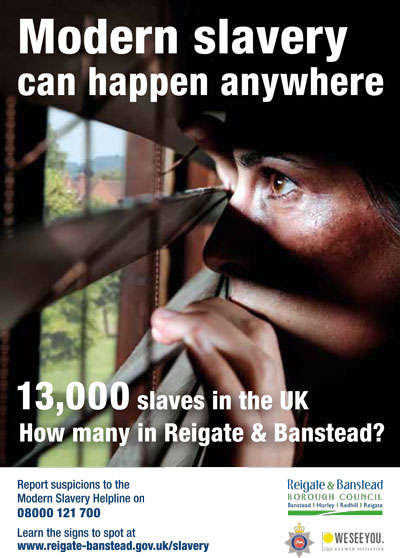 That is the message from Reigate & Banstead Borough Council, which on Tuesday 10 July launches a powerful awareness-raising campaign, in partnership with Surrey Police and the Church of England’s Clewer Initiative. The first Surrey council to launch such a campaign, it urges local action to help in the fight to end modern slavery.

“In recent Council research, nearly half of surveyed residents didn’t think modern slavery happens in Reigate & Banstead. But there are over 13,000 people trapped in modern slavery in the UK today, and they are in every corner of the country.

“Slavery is closer than we think and we all have a crucial role to play in helping to eradicate it. Victims are often hidden in plain sight – they could be working in a business used by any of us, like a car wash, nail bar or takeaway, or be housed in a property up your street.

“Communities keeping their eyes open could save someone from a life of slavery. We’re calling on residents to help in three ways:

Do you know how to spot modern slavery?

Victims may appear unkempt, anxious and unwilling to interact; they may have few personal possessions, not have equipment suitable for their work or seem under the control of others who speak for them. More signs to spot can be found at www.reigate-banstead.gov.uk/slavery.