Come and see the internationally renowned Band of The Grenadier Guards perform at The Harlequin Theatre & Cinema, Redhill on Sunday 18 March 2018 at 3pm. 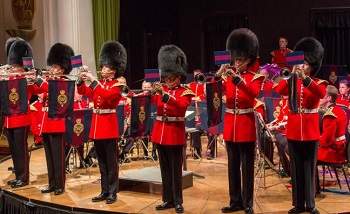 The concert promises an exciting programme of music designed to appeal to a wide range of musical tastes, from pop to classical to musicals and everything in between.

The event is being promoted by the Mayor of Reigate & Banstead, Cllr Roger Newstead in aid of SSAFA, Briain’s oldest Armed Forces charity and one of the Mayor’s nominated charities during his Mayoral year.

“This prestigious event provides a rare opportunity to see one of the world’s premier military bands at close quarters and the varied musical programme offers something for everyone, no matter what your musical taste”, said the Mayor.

“By supporting this event you will also be helping SSAFA Surrey branch to support the needs of service personnel, veterans and their families. Make sure you book soon to avoid disappointment.”

The band performs at many state functions, including Royal Weddings and Trooping the Colour, and social events and its musicians are graduates of Britain’s leading music colleges.

Following the concert, the Mayor will host a reception with light refreshments. Tickets are £7.50, available separately by contacting Beverley Barry: email beverley.barrry@reigate-banstead.gov.uk, or call 01737 276249.