The new Mayor for Reigate & Banstead, Cllr Roger Newstead, has taken up his role and announced that his theme for his term in office is ‘Respect your borough’.

Cllr Newstead was elected at the full Council meeting on Thursday 25 May. His Deputy Mayor for the municipal year, which runs until the end of May 2018, is Cllr Frank Kelly. 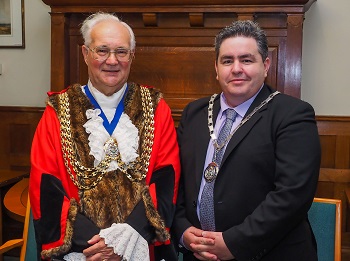 Following his election, Cllr Newstead said: “It is a great honour to be Mayor once let alone three times, but for me the prospect is as exciting now as it was for the first time. I will be out there singing the praises of Reigate & Banstead and I hope that our communities will do the same.”

The Mayor’s chosen theme of ‘Respect your borough’ for his mayoral year encapsulates some of the issues he feels passionately about and which make a difference to all our lives. He explained: “I believe that this borough is one of the best places in the country in which to live. Our business community plays an enormous role by providing jobs and opportunities to local residents and in keeping our local economy buoyant or successful.

“I am also a great believer in respecting our countryside. I want to work with schools, young people, community groups and organisations to promote the importance of looking after our borough and to encourage the many community groups that already do so much to help keep our environment clean for us all to enjoy.”

Cllr Newstead has been a Borough Councillor for Reigate Hill ward since 2001 and served on the Council’s Executive for eight years with responsibility for various portfolios. He has also served on the Planning, Licensing and Standards committees. He is currently the Borough’s Armed Forces Champion. He and his wife Mary, who will be Mayoress, have lived in the borough since 1968 and have three children and six grandchildren.

Deputy Mayor, Cllr Frank Kelly has been a borough councillor for Merstham for six years and is Deputy Chair of the Licensing Committee as well as holding committee roles with YMCA East Surrey and Age Concern, Redhill, Reigate and Merstham.

The Mayor has chosen The Reigate and Redhill Live at Home Scheme and SSAFA (Soldiers, Sailors and Airmen's Families Association) as his nominated charities.

The Reigate and Redhill Live at Home Scheme, celebrates its 20th anniversary this year, offers services and support to help older people across the borough to lead independent, active and fulfilled lived.

SSAFA is the oldest military charity in Britain, founded in 1885 and is dedicated to helping servicemen and women, veterans and their families who are in need.

Invite the mayor to your event

During their term in office, the Mayor and Deputy Mayor will represent the borough of Reigate & Banstead at a range of functions, from formal receptions and official openings to visits to local community groups and organisations, as well as hosting fundraising events for their chosen charities.