As well as restoring six war memorials, we have identified and refurbished around 200 private war graves across the borough, working with the Commonwealth War Graves Commission.

We are keen to trace any relatives or friends of those buried in the borough's war graves to let them know about this project and to find out more about the lives of the people buried there and their wartime experiences.

If you have a story to tell, please get in touch by emailing leisure.services@reigate-banstead.gov.uk.

Over the last four years school pupils, uniform groups, local organisations and residents from across the borough have stepped forward to help us to look after the refurbished war graves, so they can be kept neat and tidy over the coming years.

Volunteers are still needed to help care for war graves at certain sites, so if you’d like to get involved, please email  cemeteries@reigate-banstead.gov.uk or call the Greenspaces team 01737 276096 to find out more. 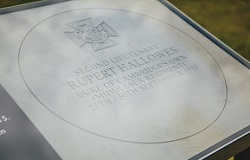 He died on 30 September 1915 and was awarded a VC for his 'Most Conspicuous Bravery and Devotion to Duty' during the fighting in Hooge in Belgium.

As well as the Victoria Cross, Lieutenant Hallowes was awarded the Military Cross.

He is buried at the Bedford House Cemetery in West-Vlaanderen, Belgium.

The commemorative stone was unveiled on 24 September 2015, the centenary of the battle for which Hallowes was awarded his VC.

You can read more in our news item here